How do I Render Individual Pixels in Flutter?

Asked by creativecreatorormaybenot on April 25, 2019 (source).

I am using a custom RenderBox to draw.
The canvas object in the code below comes from the PaintingContext in the paint method.

I am trying to render pixels individually by using Canvas.drawRect.
I should point out that these are sometimes larger and sometimes smaller than the pixels on screen they actually occupy.

I am storing the pixels as a List<List<Color>> (colors in the code above). I tried differently nested lists previously, but they did not cause any noticable discrepancies in terms of performance. The memory on my Android Emulator test device increases by 282.7MB when populating the list with a 999x999 image. Note that it only temporarily increases by 282.7MB. After about half a minute, the increase drops to 153.6MB and stays there (without any user interaction).

With a resolution of 999x999, the code above causes a GPU max of 250.1 ms/frame and a UI max of 1835.9 ms/frame, which is obviously unacceptable. The UI freezes for two seconds when trying to draw a 999x999 image, which should be a piece of cake (I would guess) considering that 4k video runs smoothly on the same device.

I am not exactly sure how to track this properly using the Android profiler, but while populating or changing the list, i.e. drawing the pixels (which is the case for the above metrics as well), CPU usage goes from 0% to up to 60%. Here are the AVD performance settings: 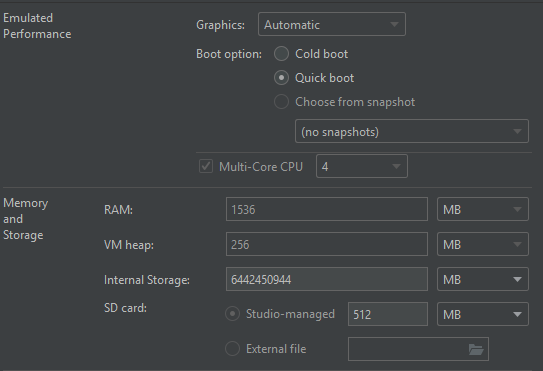 I have no idea where to start since I am not even sure what part of my code causes the freezing. Is it the memory usage? Or the drawing itself?
How would I go about this in general? What am I doing wrong? How should I store these pixels instead.

I have tried so much that did not help at all that I will try to only point out the most notable ones:

This is the conclusion I reached before trying my failed attempt at rendering using Canvas.drawImage: Canvas.drawRect is not made for this task as it cannot even draw simple images.

How do you do this in Flutter?

dart:ui has a function that converts pixels to an Image easily: decodeImageFromPixels

I was simply not aware of this back when I created this answer, which is why I wrote the "Alternative" section.

Thanks to @pslink for reminding me of BMP after I wrote that I had failed to encode my own PNG.
I had looked into it previously, but I thought that it looked to complicated without sufficient documentation. Now, I found this nice article explaining the necessary BMP headers and implemented 32-bit BGRA (ARGB but BGRA is the order of the default mask) by copying Example 2 from the "BMP file format" Wikipedia article. I went through all sources but could not find an original source for this example. Maybe the authors of the Wikipedia article wrote it themselves.

Using Canvas.drawImage and my 999x999 pixels converted to an image from a BMP byte list, I get a GPU max of 9.9 ms/frame and a UI max of 7.1 ms/frame, which is awesome!

First of, this is quite straight-forward, however, you need to correctly populate the byte list, otherwise, you are going to get an error that your data is not correctly formatted and see no results, which can be quite frustrating.

You will need to prepare your image before drawing as you cannot use async operations in the paint call.

In code, you need to use a Codec to transform your list of bytes into an image.

You need to pass this image to your drawing widget, e.g. using a FutureBuilder.
Now, you can just use Canvas.drawImage in your draw call.